I shall not go into details but some time ago a gang of very well organised Asian men were grooming young vulnerable white girls for sex in the Northern town of Rochdale.

These mostly under-age girls were ferried around and used as sex-slaves; having been plied with drink and drugs. This was a seriously nasty gang, and it involved many men.

The so-called ringleader of the gang was 51 year old Abdul Aziz (below) who was sentenced to 9 years in prison back in 2012. 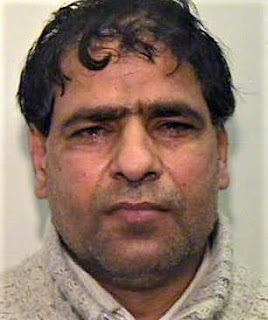 Aziz was stripped of his UK Citizenship in 2018, and was to be deported to his native Pakistan on release from prison, but it has now been revealed that the 'Bleeding hearts, woke, liberal, human rights, legal brigade' have been successful in their campaign to have him remain in the UK.
These are the people who have criminal deportees removed from planes just at the moment of departure, who demonstrate against illegal immigrants being sent to hotels in Rwanda, and no doubt want the rest of the Rochdale Grooming Gang to stay in the UK.
I cannot understand why this noisy brigade of 'do-gooders' are so vociferous in trying to keep such criminals in the UK. To me, the human rights of the abused children come well before those of Aziz. I wonder if any of the woke-brigade have protested on behalf of the victims?
And why are the Judges in UK courts defending criminals in the name of so-called 'human rights'? Time for change, lets get back to some form of common sense.
Come to the UK if you wish to benefit from all that she has to offer, but don't come if all you wish to do is commit crime; in which case expect to be sent back to whence you came.
Posted by Cro Magnon at 04:23