For those who don't know, Brighton is dirty weekends by the sea, naughty postcards on the pier, kiss me quick hats, Brighton rock, students, The Grand and The Metropole hotels, wonderful small shops, mods-n-rockers, restaurants of all nationalities by the thousand, pebbles on the beach, seagulls that steal your chips, The Royal Pavilion, The Lanes, several universities, and lots of fun. 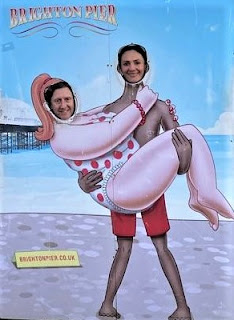 There are fabulous Georgian crescents, one of the biggest marinas in Europe, a lively gay/lesbian scene, some of the best clubs and pubs around, Chris Eubank (the boxer) hanging around street corners, antique shops, the sea (of course), and a generous sprinkling of celebs.

It's also home to artists (too many), actors, commuters, a few fishermen, scoundrels, wide-boys, thinkers, writers, eccentrics, loonies, dope-heads, and lots and lots of extremely nice interesting people.
We have foxes, seagulls, pigeons, crows, blackbirds, starlings, lots of dogs, robins, magpies, and no doubt a few rats.
On Sundays at 10am, the campanologists ring a peel of seven bells from the nearby tower of St Nicholas Church. Lovely. 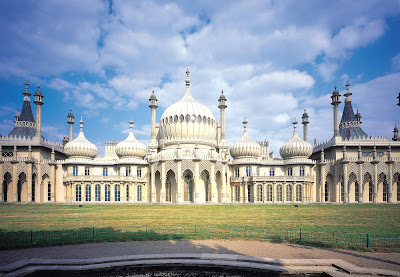 The Pavilion is, of course, Brighton's cherry on the cake, but it really isn't our only attraction. Just walking around The Lanes or The North Laine, is an experience in itself. Never a dull moment.
We have a premier league football club (No 9 in the league), which means occasional rowdy behaviour from visiting teams' supporters, in September we have the fabulous annual Speed Trials along Madeira Drive by the sea, we have superb theatre and music venues, and we have constant ozone-filled fresh air from the channel. There's also a top class racecourse.
Frankly, I'm surprised that the whole of the UK doesn't live here; but I'm quite happy that they don't!
Posted by Cro Magnon at 04:17