Not everything goes well in Shangri-La. 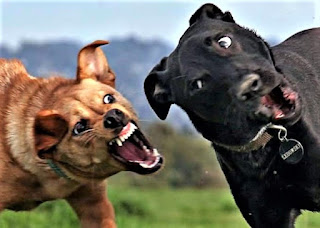 Yesterday morning, whilst walking with Billy, I experienced the first real act of aggression from both dogs, and their owners; not something one expects in our usually extremely peaceful, and friendly, 'Rest Park'.
Two men were walking with their dogs, both of which were off leads. The men were both of similar ages (around 35), and both had smallish dogs; one black, the other brown.

Suddenly I heard terrific growling and barking as the brown dog attacked the black one. The owner of the black dog kicked out at the brown one, whose owner rushed towards where they were fighting, and prized them apart.

Owner of brown dog then started shouting and swearing at the owner of the black dog for having kicked his dog. Owner of black dog shouted back 'your effing dog was attacking mine, what do you effing expect me to do'; etc, etc. I'll spare you the worst of it.

The argument escalated to where fists were proffered, and pugilistic stances adopted. Luckily a lady dog-walker stepped in, and the two men parted whilst still effing and blinding at each other as they walked away. For a moment I thought they were going to begin throwing punches; it was quite dramatic.

I witnessed all this from a distance of about 30 metres. Never a dull moment, eh?