Tales from The Crypt.

I could write forever about the small park/churchyard where I go early each morning with Billy. It has become my 'away from home, home'.
Along the North perimeter are these '14 burial vaults', one has a wooden door and is used as a room for keeping gardening equipment, but the rest are sealed and (I presume) still contain the remains of the wealthy departed who could afford such luxury. 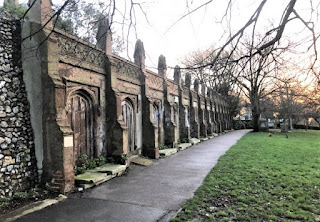 Like most of Brighton, they are built of rubble (called Bungaroosh), and later cement rendered. With the passage of time they have seriously deteriorated, and the cheap construction methods are now laid bare for all to see. 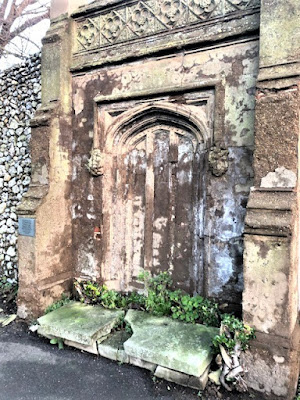 They are built of bits of old brick, roughly rendered with a very grainy mix of fine pebbles from the beach mixed with some cement. The finish is a finer mix with plenty of decorative extras. Even in the state they're in, I think they look beautiful; maybe even more so than when they were first built in the 1840's. 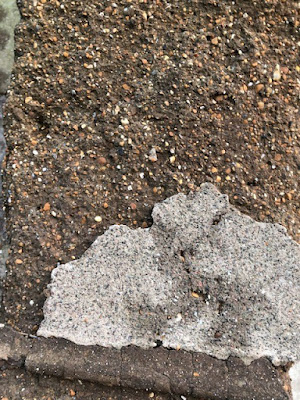 This picture above shows the pebble mortar mix used beneath the finished façade (middle right in the second photo). 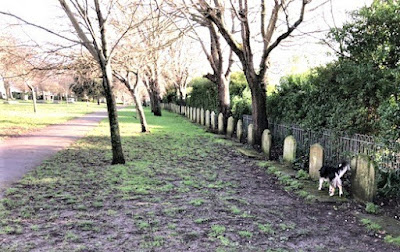 On the Southern perimeter are all the simpler gravestones (above), removed from their original positions and replanted in a long line along the boundary. This now makes the 'rest park' more accessible to dog walkers, picnickers, or sun worshippers, who appreciate the large open space of the lawns.
Lovely sunshine yesterday, but look how muddy everything's become over the past month or so. YUK!
Posted by Cro Magnon at 04:37