Victorian terraced houses are all very much alike. Inside the long narrow entrance hall is an arch, usually supported by two acanthus leaf corbels. The first room you come to is the sitting room, often called 'the front room' (below), behind which is a family room.
Downstairs is the kitchen and dining room, and upstairs are three or four bedrooms, bathrooms, etc. Half way down the stairs to the kitchen there is usually a door out to the 'garden'. They have high ceilings and big windows. They usually follow this pattern everywhere; or something very similar. 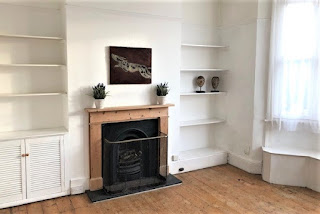 Now that the house we're living in has been finished, for the past couple of weeks we've been concentrating on the other bigger one.
Walls needed to be painted, holes filled, and doors fixed. Not a big job, but it all takes time. The whole house has now been painted, some repairs made, but we still have bathrooms and kitchens to replace, some new electrical wiring, and new carpets need to be laid. Give it another few weeks and it'll all be hunky-dory.  These things don't take long; just some hard work, and a few quid!!
It's a nice 'family' house, which I bought back in about 1985. I didn't get to see much of the interior of the house before I bought it, as the previous owner had let rooms to foreign students; and there were people sleeping EVERYWHERE. Still, I think my decision was good. The road is an 'owner-occupier' road (not often the case in central Brighton), and as such very community minded and friendly.
The Railway Station is a leisurely five minutes walk away (1 hr to Victoria), and the sea about ten minutes. It's a quiet road with St Nicholas Church at the South end, and all major shops within easy reach. You couldn't get more central than that!
We're not certain yet as to its future, but we have ideas. Watch this space.
Posted by Cro Magnon at 04:22