Here they go again. The Lower IVth Form on manoeuvres

Their spelling may not be perfect, but the sentiment is fine! This, below, has suddenly appeared near to where I live. 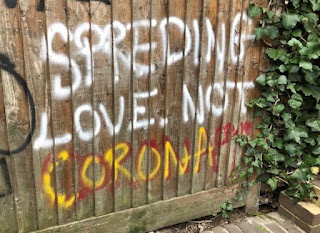 However, not everyone agrees, and people from France, Germany, and other EU countries converged on Brussels last weekend to show how frightfully clever they are.
About 50,000 unmasked 'protestors' made their feelings known, that they didn't wish to be protected from Covid-19. Instead they wished to throw missiles, smash windows, launch grenades, mingle in large groups, and generally make themselves a bloody nuisance. 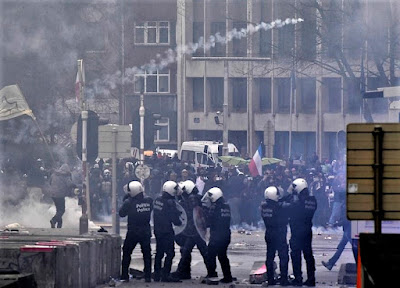 Belgium currently has an infection rate of about 60,000 cases a day; one of the worst in the EU. One might have thought it more sensible that these people stay at home, wear a mask when in crowds, and show an inkling of common sense.
Instead, this group of numpties are still behaving like naughty children, spreading the virus around, pretending to be concerned for 'freedom', and attacking the Police as if it's all their fault.
I think there should be a cold isolated island somewhere for such people, where they can live the life they preach, make and keep their own laws, and cope with the inevitable results. It would make compelling 'reality TV', and we could all snigger as we watched the chaos. They could even elect Piers Corbyn to be their King (or 'Supreme Leader of the Workers Collective Island of Nonvaxxia').
Posted by Cro Magnon at 04:33