I'm sure we've all had the same experience; you're out at Sainsbury's or Walmart, when you spot some really ridiculous mask wearing styles whilst attempting to avoid the crowds. 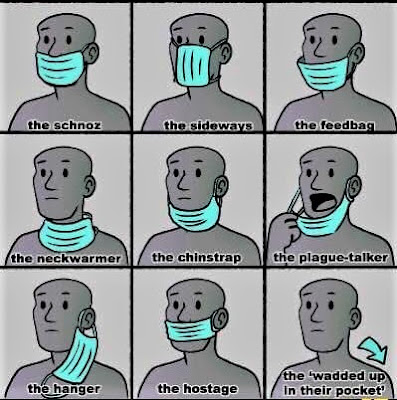 Sadly, I have to admit that the major culprits are the 'over fifties'. What they think they're doing with their masks under their noses, or under their chins, or even on their foreheads; I really don't know!
OK, we all know that mask wearing is not a panacea against catching, or spreading, Covid, but some take stupidity to another level. I've even seen a double masker; one on the top half of his face, and another on the lower half. Over-kill par excellence. I expect he was just trying to be a smart-arse.
Back in France I was horrified when a shop-worker lifted her mask in order to have a good sneeze in my direction.... I ran!
I suppose the most common silly-style is the mask worn loosely at mouth level beneath the nose, in 'foodbag' style (above), thus making it totally useless. What do these people think they doing? I'd rather see someone without a mask at all than behaving like a complete plonker!
Posted by Cro Magnon at 04:33