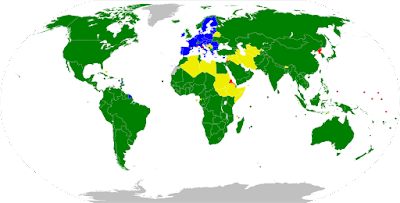 On the map above, the green areas represent members of the WTO (The World Trade Organisation).
The much smaller blue area is the EU (The European Union).
The Yellow and red areas are either thinking of joining the WTO, or are observers. If you look very carefully at the map above, you will note that the UK is already coloured GREEN.
The WTO boasts 164 member countries, whilst the EU has just 27.
The WTO employs 650 staff, whereas the EU employs 32,000.
Strangely, the EU collectively, is one of those 164 members, as is the United Kingdom. As you might imagine, the WTO covers considerably more world trade than the EU; in fact 96.4% of ALL world trade goes through the WTO. Just look closely at that map; it gives a good idea of their scope!
So why the hell are we allowing the EU to hold the UK to ransom? Presuming that a 'No Deal' is now very likely, the UK will simply turn her head towards Luxemburg (the home of the WTO) rather than Brussels, pay her considerably reduced dues, and continue to trade with the whole world; including the EU.
I cannot see a problem. The EU is a trading pipsqueak in comparison with the WTO, and so what if in future the Brits drive Hondas instead of VW's, drink Californian (or English) fizzy wine instead of French, and eat NZ Cheddar instead of Cantal.
Would anyone either care or notice?
Posted by Cro Magnon at 04:27