Brit' Cheese and the origin of Fizz.

The French are very proud of the fact that they have a cheese for every day of the year (and they go on and on about it).
What they don't know is that the UK produces over 600 types of cheese, but best not mention it! 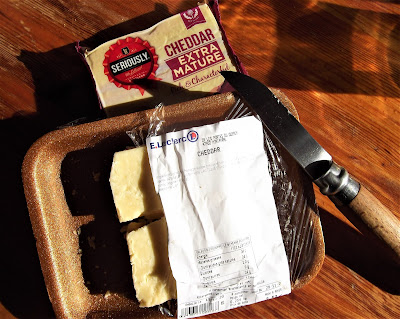 Up until recently the only UK cheese available in my supermarket was the quite acceptable  'Seriously extra mature Cheddar', which hails from Scotland.
Last week, however, I noticed some packs simply marked 'Cheddar' in the pre-packed cheese section, so I had to buy some.
I was amazed. This was better that most Cheddar that's sold as 'mature' or 'tasty' back in the UK. It really was delicious.
Maybe with Brexit on the way, they're suddenly realising what they might be missing! Someone might even let them know that the UK has over 600 varieties of cheese (most of which are actually edible).
But it's still probably best not to mention that the method of making Champagne started in England. Dom Perignon claimed to have invented Champagne in 1697, but Christopher Merrett of Winchcombe in Gloucestershire actually wrote of his method for making sparkling wine, 30 years earlier in 1662. No doubt Perignon had a copy of Merrett's thesis, but forgot to mention where he'd got the idea from.
However, to mention this might cause another 100 years war.
Posted by Cro Magnon at 04:28