We've been vaguely planning a summer party for next year; provided that Covid-19 allows such things.
About 25 years ago, my oldest friend Michael came to stay. We are the same age, and have known each other since we in were short trousers and played with cowboy guns at Prep' school.
His visit also coincided with our mutual 50th birthdays, so we decided to hold a big-bash. 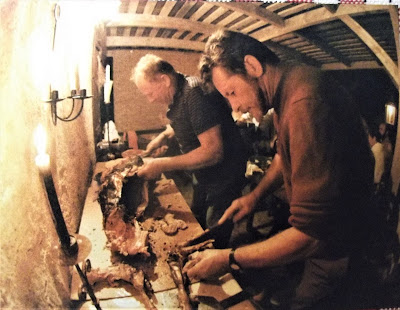 I purchased a whole Lamb, hired an expert roaster (Jean, above in background), and sent invitations to just about everyone we knew. I can't remember how many were here, but around 50 or 60-ish.
I bought a LOT of wine, lots of paté, mountains of bread, and a truck load of flageolet beans, salads, and tomatoes.
Jean and the Count Malvinski (foreground above) did a fabulous job of carving the roasted beast, and we all tucked into a Herculean banquet. 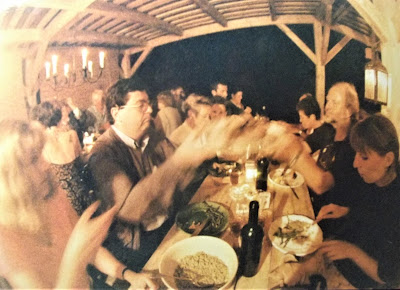 The photos are dreadful, probably on account of too much wine, but they do give some idea of the occasion. There were about twice the amount of guests as shown in the photos, most of whom were off to the right.
We were eating left-over lamb for two weeks. 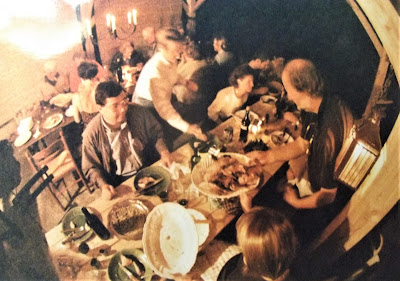 We did think that we'd never do such a thing again, but if we did it would certainly be without a whole Lamb. Jean (the spit-roaster) is no longer with us, I'm not sure if the Count is either, I haven't heard from him for years. Several of the other diners, I know, are also now also in Mechoui heaven.
I seem to remember that there were two veggies amongst us; they must really have struggled.
Now that we know we'll be returning to Blighty in late September 2021, to over-winter, we have thought of holding one final big-bash.
We could roast a few legs of lamb, a few chickens, some guinea fowl, and half a dozen quails, and hope for the best. The barn has a beautiful new terrace, and inside is big enough to accommodate several trestle tables in case of rain. We also have plenty of friends who love to sing.
What could be better!
Posted by Cro Magnon at 04:23