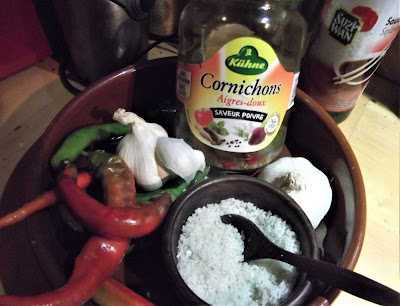 Gherkins are the small fruit of the 'Ridge Cucumber', a short plump Cucumber with a spotty surface; they were picked when about 7 cms long.
The 'Ridge Cucumber' is a highly prolific producer of fruit, and as long as one continued to pick regularly, its production would continue for quite a while. It was also a very easy plant to grow. The Gherkins didn't need to travel far; there were several processors in the immediate area.
The merchant would come to the house every other day, weigh our crop, and pay in cash. It was a very efficient way of making 'pocket money'.
Then it all ended. No doubt new regulations came from Brussels that halted the production. My photo above shows the Kühne Cornichons that I now regularly buy; they hail from Germany (well, they would wouldn't they).
In the grand scheme of things, Gherkins may be of little importance, but it's just one of many things that have disappeared from the farm gate. Farms no longer have Cows, Pigs, Ducks, Geese, Chickens, vineyards, or even any 'edible crops' (I did see some fields of Tomatoes this year). There are only two major crops regularly grown; Sunflowers for oil, and Maize. As there are very few cattle around, even haymaking has become pointless.
Fields upon fields are now left unworked. Most are mowed for the sake of tidiness, and their owners continue to receive their 'Single Farm Payment', regardless of anything being grown.
Brussels has a lot to answer for. Gherkins may not be the perfect gauge of a country's agricultural health; but they certainly represented another nail in that coffin that has become European farming.
Posted by Cro Magnon at 04:26