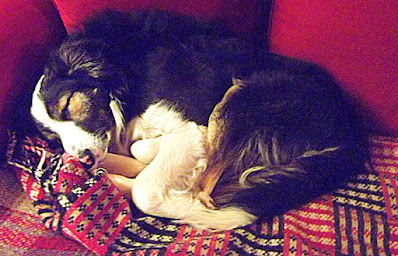 Billy is a fun dog, but he has his eccentricities.

I really enjoy taking him for his early morning walk each day. He so obviously enjoys himself that every day he makes me smile. He has a beautiful spring in his legs that simply oozes 'fun'. No Deer is safe from a good chasing.

However, he does occasionally show strange behaviour. Every time I attach his lead he curls into a ball as if he's about to be beaten; I have no idea why he does this. He also hates being brushed, and will often snap at us; we have to reassure him that it's all OK.

He has never been abused by us, but occasionally his behaviour suggests that he has; and that he's frightened of us. He quite often shows signs of fear. We did have a couple of neighbours who HAVE been nasty to him, throwing stones, kicking, and hitting him with a stick, etc; so maybe it has left a mark.

Luckily the worst of these people has now moved away. It's strange that whenever we met these people's own dogs they have always come to say 'hello'. If one is kind to animals, usually they reciprocate the kindness. We've always had a lot of canine visitors; they didn't.

Generally he's a lovely dog to be with. He has boundless energy. He'll chase, and bring back, Tennis balls all day long. He's also madly in love at the moment, the object of his passion being a beautiful German Shephard called Amie.

It is claimed that a dog covers about 10 times the distance of his/her owner whilst out walking. In Billy's case I would raise that figure to 50 times!

I should add that his pink nose is now almost all filled-in with black. Another few months and he'll be the most handsome Border Collie in France (well, actually, he already is).