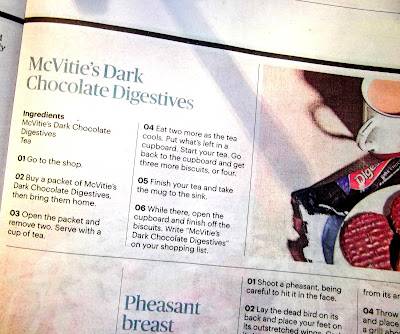 Jeremy Clarkson is an unlikely wizard in the kitchen, but he does have some notable recipes.

The above, for example; you can't really say much against it. McVitie's dark choco bix, and a cuppa. Even his recipe and method is easy to follow.

I can also recommend his Pheasant Breast, which begins with having to shoot a Pheasant in the face, or his Aga cooked Lamb Chops with New Potatoes (recipe obvious), or even his Shepherd's Pie where he suggests murdering a Sheep and mincing its innards before frying.

His recipe for Radishes contains washed Radishes; now't else.

These and other Jeremy Clarkson recipes can be found in last week's Sunday Times 'Culture' section (March 1st 2020).

Just pray that he doesn't write a whole cookbook.