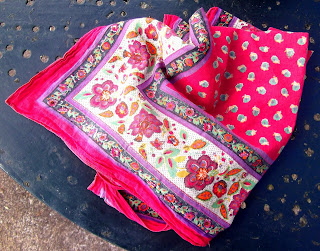 I've never been a fan of snuff, but it did have interesting spin-offs (spins-off?).

Taking snuff is as pointless and unhealthy as smoking tobacco itself. The fact that it's been ground into a fine powder, to be stuck up one's nose, is no redeeming feature. The very act of introducing an alien product into the body (other than red wine) is not to be recommended.

However, the fact that 'snorting' snuff made one sneeze, meant that the 'snorters' required their own specific handkerchiefs; and why make snuff handkerchiefs dull, when one can make them uber-decorative, such as the above.

I used to buy these at a shop called 'The Tie Rack' in Brighton; more known for their ties than hankies, but they always stocked a few for the discerning buyer. That particular branch of The Tie Rack is now long gone, however, if they were still there I would have continued to buy their hankies.

The above is the only example I could find for the moment. I have several, including plenty of the bog-standard red spotted ones (the ones you wrap your sandwiches in, when you're leaving home).

So much nicer than plain white hankies; a classier sneeze altogether.