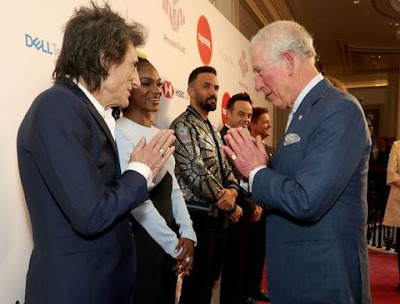 As you might imagine, no longer being able to either kiss or shake hands with friends and neighbours in France is almost akin to being banned from eating Snails.

I'm pleased to see that Prince Charles is leading the way in this respect, and has adopted a rather Indian looking greeting, with hands together and the hint of a bow.

I think this could catch on. The rather silly elbow touching, or fist bumping, should be universally banned, and exchanged for the new 'Carolean Greeting'. It comes naturally to most people, it shows respect, and is already in use by millions of people around the world. We might even all end-up becoming Buddhists.... not such a bad thing.

So, well done Charles, I shall follow your example, and Ronnie Wood seems to agree too!