The lure of junk. 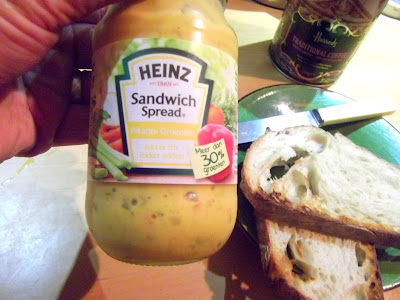 I suspect we are all guilty (at times) of eating some pretty trashy rubbish; behind closed doors of course.

I'm probably guilty of numerous gastronomic faux pas, one of which was certainly buying this jar of Heinz Sandwich Spread; a bizarre pot of cheap Mayo mixed with small red and green 'bits'.

The label is in Dutch, so I can only go by the illustration which suggests that the 'bits' are finely chopped red pepper, celery, onion, and gherkin. The taste would go along with that.

I am perfectly aware that this is rubbish food, but it takes me back to summery Cricket Teas when I was still at Prep' school; aged about 12/13. At about 4pm, the kitchen staff would appear from the pavilion with mountains of Sandwich Spread sandwiches, and huge jugs of Orange 'coloured' drink, that I think was made from powder. It was all so wonderfully refreshing and comforting, and not a single small boy failed to tuck-in.

I'd been looking for Lady M's favourite Peanut Butter on the 'foreign foods' aisle, when I spotted the above, and I simply had to have it. It's a bit more yellow than I remember, but the flavour is still the same. It won't last long. Lady M herself even tasted it, and declared it to be OK; praise indeed.

There still wasn't any of her favourite Peanut Butter; it having been replaced by a horrible new very oily French version. Yuk.