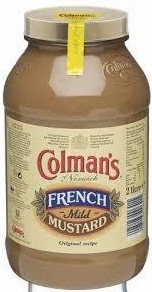 One of the products that we all knew as children was called 'French Mustard'. Unlike English Mustard it was dark brown, quite mild, and tasted of vinegar. In some ways I quite liked it.

However, having lived south of La Manche for nearly 50 years, I have yet to encounter any such product here in France; which we were led to believe was its country of origin. It simply didn't, or doesn't, exist.

We keep just four basic Mustards in the house. Colman's powder, simple cheap Dijon, Maille Mustard with Honey (for Lady M), and (since quite recently) some Heinz Yellow Mustard, which is used exclusively with certain German style Hot Dog sausages that we eat with Sauerkraut. I don't particularly like grain Mustard, nor most fancy varieties that come in fancy jars at a fancy price.

When growing-up, we always had one of three roasts on Sundays; Chicken, Beef, or Lamb. It soon became my duty to make the Mint Sauce for the Lamb, or mix the Mustard for the Beef; the Chicken came with its own delicious gravy. I don't remember any Pork roasts.

You have to be wealthy these days to afford the type of large Beef rib joints that were normal when I was young, so I imagine that sales of Colman's Mustard powder are now considerably smaller than before; and as such, children are probably no longer taught how to mix it.

I didn't mention above, but Colman's style dry Mustard powder is unavailable here; unless I've missed it.