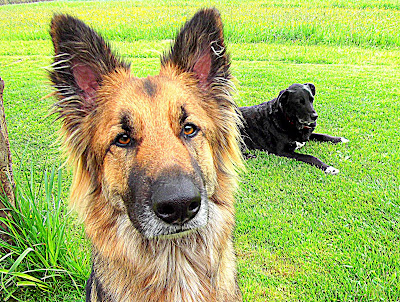 Marley still comes to the house looking for his friend Bok. He knocks gently on the door, looks around, sniffs at Bok's bed, then looks perplexed when he can't find him. When Bok lost his friend Monty, he showed no similar concern whatsoever.

He's still a very energetic pup. I imagine he must be about four, but behaves like a two-year-old. He never walks at walking pace, instead he tears around with boundless energy. I fear for my safety when I hear him coming towards me from behind, at 50 kph.

He's a beautiful boy, and loves to accompany me on my daily walks. It's a shame that someone doesn't take him in hand, and train him. He has the potential to be a really clever dog.