The end of the Caliphate. 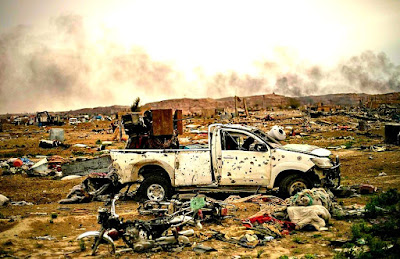 ISIS must be the most blood-thirsty and destructive of all recent religious warring factions.

The end of their so-called Caliphate has at last been confirmed by the US as Baghouz in Eastern Syria falls to SDF forces, and although a few remaining members might be laying-low, their short reign of terror is mostly over.

Now is the time to take captured ISIS members to the courts. To execute to worst of them, and imprison the others for life. Their wives and helpers could receive slightly shorter sentences (plus a few lashes perhaps).

I have no pity, or feelings of leniency, for these vile people. They have spawned a series of world-wide atrocities, and should receive similar punishment as reprisal. The echoes of their reign will continue for decades.

I would like to suggest these people are dressed in orange suits, and have their throats cut in public, but we Westerners are not as blood-thirsty. Let's just 'let them accidently fall' from the top of Trump Tower instead.