Almost time to choose the next PM.


So, who will replace May, when desperation overcomes her? 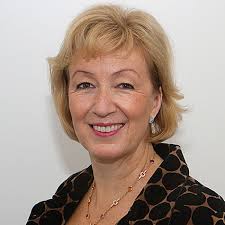 I would like to propose Andrea Leadsom. I've watched her on several occasions parrying difficult questions in her role as Leader of the House, and I've yet to see her falter or panic. She's as safe a pair of hands as any.

As far as her suitability is concerned, she has a degree in Political Science, and worked initially in the Banking/Finance sector. She's held various cabinet posts, and after the 2017 election was made Leader of the House, a difficult role that she performs with huge skill (she takes no 'bull' from Mr Speaker!)

It should be noted that on the resignation of Cameron she did consider standing for PM, but finding her support to be inadequate; she backed May instead. Andrea, like May, is an EU 'remainer'.

Leadsom is a lucid and confident speaker, she's an intelligent politician, and she has a ready smile for even her most difficult of opponents. If you didn't know on which side of the political spectrum she sat; you'd probably find it difficult to decipher; I rather like that about her. More common sense than political fervour.

I'm not promising that she'll get the job, but my meaningful vote might well go to Andrea.