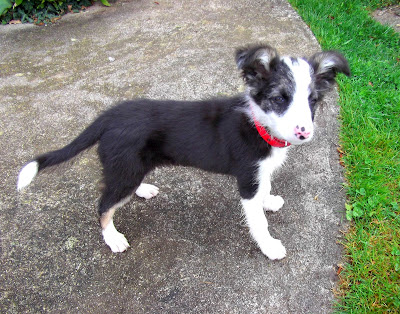 Silly Billy is now 3 months old, and is a very difficult pup to photograph.

Since joining us aged 8 weeks, he has already begun to show his true character; especially when it comes to his appetite. He arrived weighing just 1 kg 970 gms, and now weighs in at 4 kg 600.

Last week he visited the Vet' for a jab, and was given a good overall examination. He was pronounced just about perfect.

I'm sure someone must have spilt Rocket Fuel into his Puppy Food, as his energy level is unbelievable. He hardly ever walks, instead he leaps everywhere; not unlike a baby Lamb. Then on our short walks he imitates Usain Bolt. I've already started to acclimatise him to walking him on a lead, and he's accepted it very well.

He is already learning the difference between indoors and outdoors; one being for eating and sleeping, and the other for peeing and pooing. There is still the occasional mishap, but he's getting there.

All in all, he's looking pretty good. He's a very amusing little boy. He's still biting everything in sight (mostly hands), and has a penchant for eating shoes. Originally he slept in a tall cardboard box; from which he couldn't escape at night, but he's now moved on to Monty/Bok's oversized chew-proof bed in the kitchen, and feels very grown-up.

His walks are still quite short; roughly 300/400 metres, three times a day. As we are in Processionary Caterpillar season, we stick to nearby routes where, hopefully, none is around. I'll introduce him to the woods later.

He's a very cute little guy with his spotted pink nose and comical ways. I think we'll keep him!

He's much better looking than in the photo.