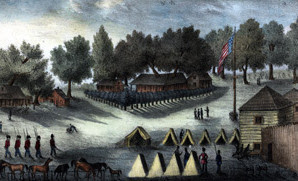 For a while in the mid-60's I was the manager of a small Art Gallery in Devonshire Street W1.

My boss, Miklos, had been to view a nearby sale, and I'd been given the job of going to bid for several lots he'd earmarked; one of which was a large portfolio of early (or old) etchings.

I bought the portfolio well under his maximum price, and returned to the gallery, complete with another couple of lots.

Miklos immediately started to search through the portfolio, becoming angrier and angrier as he realised that the one etching he'd wanted was missing. It had been placed amongst a load of more ordinary prints to attract bidders; then carefully removed. Such practices, sadly, were commonplace in those days.

However, in amongst the less interesting prints he discovered a very small black and white print that attracted his attention. It was about 4 by 5 inches in size (the image even smaller), and quite amateurishly etched. It illustrated a battle, with two 'cherubs' holding a swag depicting the location and date. It was not particularly inspiring.

I'm afraid I've forgotten the exact details, but it illustrated a skirmish from the American civil war, and looked to be very rare. It might even have been a sole surviving example.

I was instructed to take it to The Parker Gallery in Albemarle Street, and to ask for £500 (a lot of money in those days). The Parker Gallery was (and probably still is) one of those lovely old-fashioned Oak-panelled galleries that only dealt in the finest and rarest.

They looked at it under a magnifying glass, held it to the light, passed it around, then asked how much I wanted for it. I was almost embarrassed to ask for the £500, but I did so. They didn't flinch!

To my amazement they wrote me a cheque and the deal was done. I came out feeling that, had I asked for £1,000 they would probably have paid it. It must have been an extremely rare print.

Its sale made the missing etching from the portfolio seem unimportant; and we still had about another 100 etchings to sell.

p.s. I'm afraid the illustration above is nothing like the etching, but I couldn't find anything more suitable.