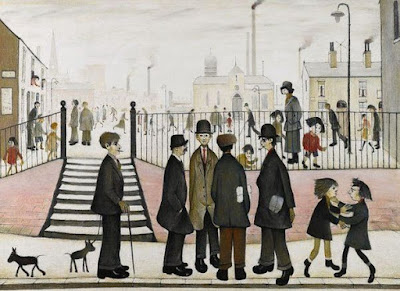 Whilst preparing our ghoulish outfits etc for Halloween, we were, at the same time, half watching a UK antiques programme on TV.

At one point my attention was directed towards a rather poor painting of a 'Stately Home', that the programme's presenter, Paul Martin, described as a work of genius.

The painting was by L S Lowry, who Martin went on to describe as 'One of England's Greatest Artists'.

Lowry studied at the Manchester School of Art under Pierre Adolphe Valette, and his work can often be mistaken for that of Valette; making it as close to plagiarism as is legally allowable.

Personally I have always thought of Lowry as a 'novelty painter', in the same ilk as Beryl Cook, or Alfred Wallis. I would never describe him as a 'Great Artist'; nor would I Cook or Wallis.

I welcome your opinions about Lowry; have I missed something? Was Martin right?