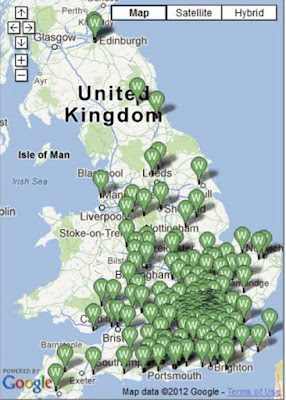 I'm not sure what this map says about Blighty, other than there are more Waitrose stores in the South than the North. Maybe the Scots and the Welsh simply prefer Tesco; I doubt if it has anything to do with affordability.

Just for the information of non-Brits, Waitrose and Tesco are popular supermarkets.

This map (above) shows the distribution of Walmart stores across the USA. As opposed to Waitrose's North South divide, Walmart has a West East divide.

I have no first-hand knowledge, but I believe that Walmart is at the cheaper end of the market, so one can presume that the right half of the US is where the 'bargain hunters' live.

Such maps are informative, but probably say less about society than we are led to believe. The world now has TWO major stores that are believed to be cheaper than most others. Lidl and Aldi are both German owned, and attract people from all walks of life; the rich and the poor.

As you can see by the distribution of Aldi stores across the USA, they follow the same pattern as Walmart stores; occupying the right hand side more than the left.