I blame his parents! 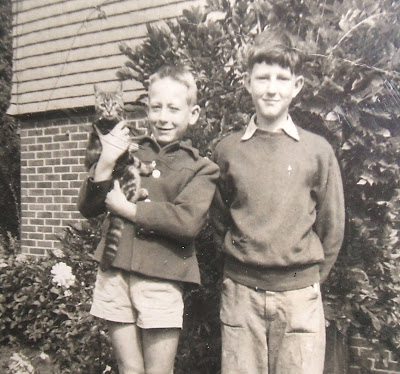 My people had a friend who was at our Consulate in Dieppe (N France), and he knew of a family in the town who were looking for an 'exchange student' for their son Didier. He thought we might be interested.

The family in question were described as genteel and pleasant. The father was an architect, and they lived in one of his own designed houses overlooking the town and sea. They also claimed to have some 'gallows' in the garden; which later turned-out to be swings. They sounded quite suitable.

So, aged about 10, off I went to stay with Didier's family. I think I was to stay for two weeks; in which time I was no doubt expected to learn to speak perfect French.

After the first week we set off on a trip. We headed West along the Normandy coast, then South to the Loire valley, then East towards Paris, then back again North to Dieppe. It was a trip that lasted about four days, and was a wonderful experience.

At one stage we visited a restaurant where nets-full of wriggling tiny silver fish were pulled out of a small stream (which ran through the middle of the outdoor sitting area). These were floured, then instantly deep fried. Big platefuls of these tiny fried fish regularly arrived at each table with wedges of Lemon. I'd never seen anything like it before, and found the whole experience fascinating (and delicious).

Didier's family were totally charming, and after my two week stay, he came to stay with us in Surrey.

Above is Didier, me, and our cat Tiddles (all our black cats were called Blackie, and all the tabbies were called Tiddles), at our Surrey home. I've always wondered what happened to Didier. I've looked for him on the net, in the phone book, etc, but no sign of him anywhere. I would liked to have thanked him for the important part his parents played in forming my love of France.

p.s. Those jeans I'm wearing were the best ever. They were very faded, very baggy, and very comfortable. I loved them. They don't make them like that any more!