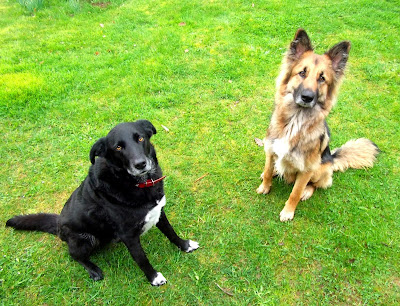 Bok's mate Marley often turns-up in the early mornings for our first walk of the day. He's a bit boisterous for Bok, but he's slowly calming. He's a really lovely boy, and is desperate to learn (I'm teaching him 'commands' in English).

He and his stable mate wonder around, visiting everyone in turn; saying hello to all his canine and human pals.

If our late Monty's limited wanderings are anything to go by, Marley's owners must have received a mountain of nasty Emails by now. He's very much a free spirit, and is permanently in a neighbour's garden (where Monty strayed 3 times). In Monty's case it resulted in an unpleasant rebuke; so one can only presume that it's the same for Marley's owners. His 'inbox' must be overflowing!

We abided by the request. Marley's owner obviously didn't.