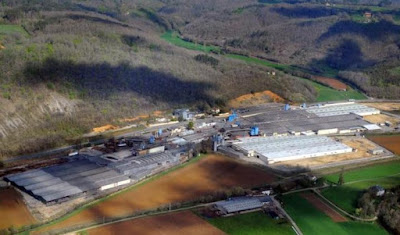 'Marty's' in Cuzorn (quite near here) was a huge maker of wooden Parquet Flooring, it employed between 200 and 300 people. In fact it was one of the biggest companies/employers around. Its buildings must have covered several hectares, and its output was huge. Most of its wood was bought from local landowners/farmers, and played a major part in the local economy.

Just a few years ago it went to the wall, and they tried to find a new buyer; no-one came forward. Now the place is being dismantled, and the resulting metal is being sold off for scrap. 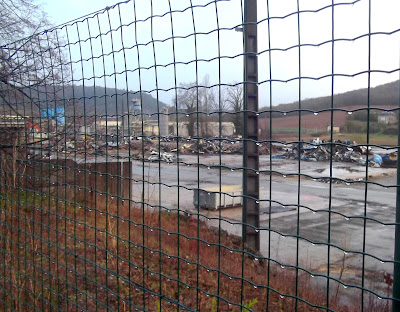 I drive past Marty's a couple of times each week, and I've been following its slow demolition. I took this rather poor photo yesterday; it's so sad to see what was once a thriving business being reduced to piles of twisted metal.

Why? I believe that Parquet Flooring was being imported from China, and elsewhere, at far more inviting prices, so the end was almost inevitable; as with so much in Europe.

Dare I say it, but don't price yourselves out of the market; unions please note! Adieu Marty, RIP.