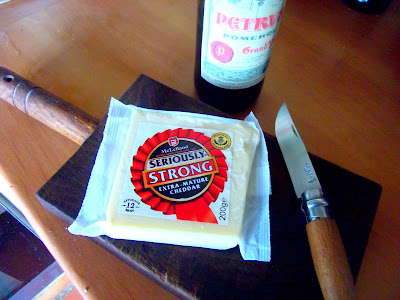 I have mentioned before that this cheese, above, is just about the only representative of the British dairy industry that one is likely to find in any French supermarket.

I have only recently discovered why!

Back in 2005 The enormous French 'Lactalis Group' bought A McLelland & Son, the Scottish makers of 'Seriously Strong'. So, in effect it's now a French cheese, but made in Scotland (I presume).

The French are so protective of their cheeses, that it was almost obvious that some jiggery-pokery had taken place over 'Seriously Strong'.

The Lactalis group make all your favourite 'President' Camembert and Brie cheeses; in fact they make almost every French cheese that you are likely to find in any normal (non-deli) shop.

That picture on your cheese wrapper of an attractive 'dairy maid' making cheese in her cosy farm cottage, should in fact show a huge factory. Such is life.