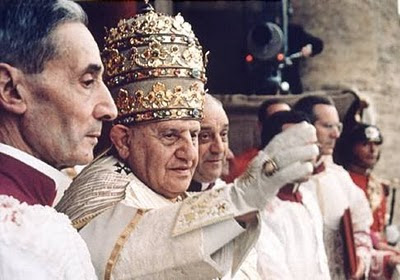 Pope John was the first Vatican incumbent of whom I was properly aware. He was a world figure who seemed to be as much head of the Protestant church as that of Islam or Buddhism. He seemed to glean admiration from all religions, without prejudice from any direction.

I remember that I liked his face, and always tried to imagine him in a dark, wide lapeled, pin-striped suit, sucking on a fat cigar. He could just as easily have played the part of Mafia Godfather, as that of Moral Godfather. He had the right countenance for either rôle.

Stories about this pleasant Pope are legendary, and most of them are probably also invented. I do, though, remember one tale that always comes to mind when I think of any Pope, but it was attributed to Johnny.

Apparently it was traditional for all Popes to eat alone, and our particular Pope John didn't like this one bit. His dining room looked out onto the Vatican gardens, and he decided, surreptitiously, to invite the gardener to dine with him.

It is said that they talked of football, women, hunting, and the day's news; anything but religion.

I think John may have been one of the wisest ever Popes. I think I would have enjoyed a plate of pasta in his company (which I would have prepared for us myself, of course).