Prior to 2004 (when Fox hunting was banned) a rough estimate of around 20,000 Foxes were killed annually by organised hunting. 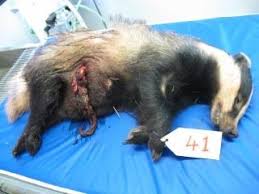 However, more than a staggering 33,000 Badgers were culled in England and Wales in 2017.

It is well documented that Foxes do a lot of harm to farm animals and fowl. I myself once had a whole Chicken-run-full of birds killed over night; I think I lost 20-ish, and was not happy!

Badgers, on the other hand do no direct harm to animals; they are mostly veggies. There are, of course, serious arguments about Bovine TB, but it is far easier to inoculate herds of cattle en masse, than it is to hunt down individual Badgers.

Why, therefore, do we still see hoards of urban snowflake anti-hunt saboteurs out in the fields trying to cause trouble for riders who are simply following the trail of some stinking sack? None of these so-called animal lovers seem to bother about the daily shootings, and poisonings, of innocent Badgers.

Could it be that the people who ride-out on horseback whilst wearing smart clothes, are the REAL target of this transparent class hatred? As I mentioned above; the actual hunting of Foxes is now banned, so there is no real reason for the saboteurs to be there.

These 'friends of Le Corbyn' obviously prefer to protest about a group of people riding-out together, than to wave their copies of The Morning Star at those who slaughter Bill Badger and his ilk (which is probably undertaken by 'working class comrades' in cloth caps and gumboots).

Yet another example of urban v rural socialist hypocrisy.