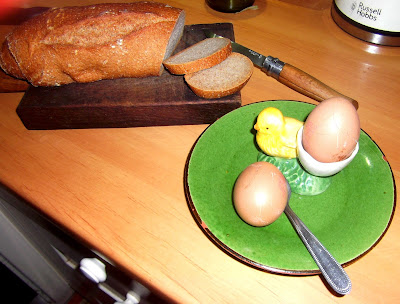 Breakfast worries me. I'm now convinced that if I consume a single rasher of fried bacon, I will put on 5 Kilos, my diabetes will rage out of control, and I'll have a sudden urge to strangle Kittens. It's that bad.

So, fried breakfasts are a rarity. Instead I eat sensible things like Muesli, re-heated left-over curry, and medium boiled eggs.

But eggs spell danger. As we all know, they are filled with salmonella, cholesterol, and cancer. Not long ago it was recommended that we ate no more than one egg every two years (at our own risk), but this has now been slightly revised. We can now eat a dozen or more each day without any ill health worries at all. Thank heaven for wise egg-scientists.

The ones above were consumed yesterday. They were slightly overcooked, as half way through their preparation I was called upstairs to examine a damp patch on the ceiling.

The damp patch proved to be no more than a shadow, and, as a result, my eggs were less than perfect. I'll boil some more again in a week or so (unless the egg-scientists advise otherwise).