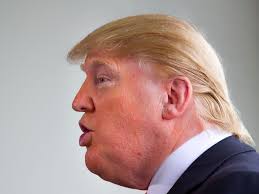 Before, during, and for a short while after the recent US election, I over-generously gave Trump the benefit of my doubt; I couldn't believe that he would continue in his boorish fashion once he had his knees beneath the oval office desk. It would have been in his best interest to become more 'pragmatic and presidential'. How very wrong I was; as we all now know, he refused to become so.

If anything he has become more of an oaf than before. His arrogance has increased, his posturing is more pronounced, and his questionable mental state even more in question.

The man is a laughing stock, as well as being a serious danger to every single one of us. The USA used to be seen as a progressive, modern, country; it is now seen as a 'toxic' world problem. As a respected Washington commentator recently said 'It's like watching a great power committing suicide in front of a global audience'.

I suspect that the orange hooligan wishes to go down in history as the man who destroyed North Korea. Maybe both he and fat boy should be locked away safely before they destroy the whole bloody planet.

If that wasn't enough, he's started to insult Britain. YOU DON'T DO THAT Sunshine. Yet again, I despair.