They loved each other so much. 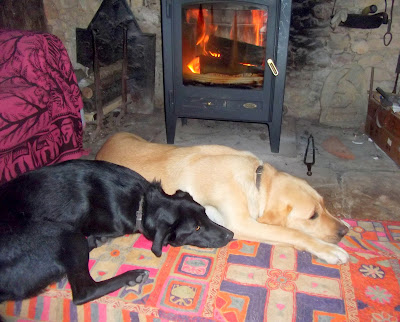 I would say that Monty and Bok loved each other with a passion; they were inseparable.

They met when they were still 6 month old pups, and remained faithful to each other until Monty's sad demise.

Then suddenly, when Monty was no longer with us, Bok seemed to act as if he'd never existed. Previously when I mentioned Monty's name, Bok would immediately sit up and look for him; after his death it was almost as if he'd never heard the name, or knew to whom it had belonged.

We'd made a point of showing Bok Monty's lifeless body, and he attended his funeral (at Haddock's), so I imagine that he understood. But to suddenly behave as if he'd never existed took us by surprise.

No doubt Dogs understand death, and perhaps they simply draw a line. Bok's reaction was to block-out his memory, and instantly take over as Top Dog in his stead.

No howling at the moon, or tears over his vacant bed; just total disinterest. Very strange.

It's Monty's birthday today, he would have been 7. We miss him.