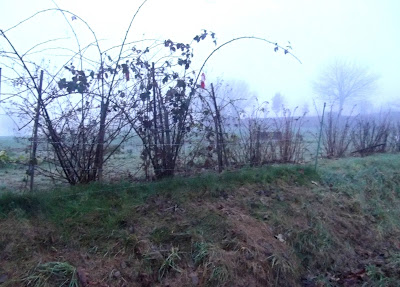 Some time ago I mentioned about rescuing some discarded Blackberry cuttings from a nearby garden. They were of a particularly good thornless variety; but, although they started off well, sadly none of them survived.

The garden from which they came was quite large. The man who worked it comes from a village 7 kms away, and had generously been offered free use of the strip of land by my lovely neighbour L.

He grew a vast amount of produce; far too much for just he and his wife, so I imagine he was selling it.

The garden has now been stripped bare; hardly a single plant remains. The unpleasant man in question was a big supporter of the proposed 'holiday village' (even though he doesn't live in our tiny hamlet), and was exceptionally rude to L (how crazy is that!), to Lady Magnon, and a few others who were against the plan. He has always been a loud-mouthed old fool for whom rudeness and oafishness was a way of life. As a result, he has now been deprived of his free patch of land, and all that it offered. He's now taken out all his winter vegs and perennials, and has departed with his tail between his legs.

His was the second case of such rudeness that we have experienced in the past couple of years, and both perpetrators have lived to regret their silly outbursts; proving, I suppose, that it always pays to be courteous and well behaved.

Some simply have no idea how to behave, others do; boorishness does not distinguish. Good riddance to him.