Off to the moon again. 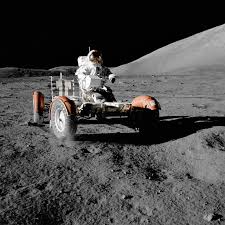 President Trump has just announced that the USA will once again point rockets at the Moon and beyond.

I don't know how much money it costs to go swanning around in space, and landing on floating lumps of dusty rock, but I do know that the money could be much better spent down here; where it's really needed.

We pollute the air, we pollute the soil, and we pollute the waters; so much so that people talk of our lovely planet being uninhabitable in years to come, if it's not blown to bits by nuclear weapons.

So what do they want us to do?  Are we really supposed to go to live somewhere where there is no air to breathe, no soil in which to plant our crops, and no vegetation whatsoever. Are they effing kidding?

Dear Mr Trump; why not simply try to make our true 'home' a better place to live. Let's not poison it any more than we have to, let's reduce the massive world over-population, and let's no longer rape and pillage every ounce of the world's minerals in order for the few to become inordinately wealthy.

And don't think, Mr Trump, that we didn't notice your mention of 'Military uses' in space; because we did!

No, let's not go back to the Moon, Donald; it's really not a very nice place, and I for one am certainly not going to live there.