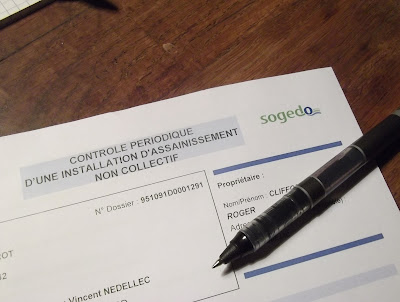 The Inspector (I suppose I have to call him that) was a 'still wet behind the ears' spotty youth, who looked as if he'd just been expelled from school.

He asked lots of questions; I answered them. He wanted to see locations; I showed him. He took measurements; I assisted him.

Just a few weeks before his visit we had replaced all the large red plastic perforated soak-away pipes; he was impressed. He sniffed at the air; no pong. He smiled as he took copious notes of what I told him.

Then I receive this report, and frankly it could be for a totally different house.

He did get one or two things right; the home-owner's name, the location, and the date. But other than that, the whole 5 page report is pure fiction. I'm now just grateful that he said all was OK; if he'd been in a bad mood we might well have had to replace the whole bloody lot.

His two most encouraging words were 'acceptable' and 'correct'; other than that you'd have thought that we had a home-made 'earth closet'.