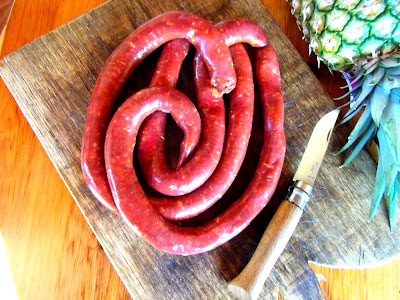 Merguez are one of my favourite sausages. Spicy and deep red in colour, they are made from a mix of Beef and Lamb, and are flavoured with Cumin and Pepper.

Originally from the Maghreb, they travelled north with the fleeing Pied-Noir population, after the Franco/Algerian troubles of 1954-62, and have since become a staple in this region of France; especially on Summer BBQ's.

I remember many years ago that I wanted to take a few kilos back to the UK for the freezer. Instead of buying them down here I decided to stop-off at a Supermarket in Calais, and buy them fresher up there. When I came to the meat department there was no sign of any, so I asked an employee where I would find them. He had never heard of Merguez. They had not yet reached that far north. Nowadays I imagine that they can be bought throughout France, and even elsewhere.

If you haven't already done so, I recommend that you try some. Last night I had a few with some Puy Lentils, and the essential squirt of fiery Harissa. Lovely.