Tomatoes (for want of another word). 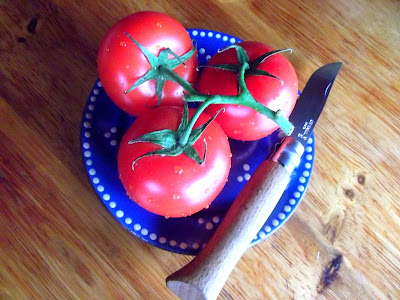 I try not to buy out of season Tomatoes, but occasionally a recipe insists, and one is compelled.

If I do buy them, I tend to buy these so-called 'Vine Tomatoes'; they look nice and suggest that they have at least some flavour.

These one's above, however, take the bloody biscuit. Not only are they very hard, but they have ABSOLUTELY NO TASTE WHATSOEVER.

They must be a new breed; the perfect prairie growers fruit. I have grown Tomatoes for most of my life; some indoors, but mostly outdoors. I have NEVER NEVER NEVER produced a Tomato that was so totally tasteless. If I did, I'd throw it away at once; why don't these growers do likewise!

For goodness sake you bloody growers; surely you can grow something with SOME flavour; these ones were no more than red fluff.