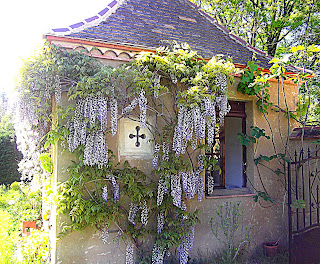 When I was still planning to build my 'tower', a friend said that it was a shame, because I'd lose a lot of the garden.

I replied, on the contrary, I would be gaining garden. A garden isn't just the amount of open space, it's what's in it that counts.

I'm not someone who reads gardening books, but one I did read many years ago had quite an effect on my whole attitude to garden design.

I know the book was by John Brookes, but I can't remember the title; it may have been 'The Outside Room'. In it he spoke of planting a rose in an open field, where it would look ridiculous, but against the wall of a cottage it looks superb. Without the background, the rose had no purpose. That's how I envisaged the 'tower' (above); it was a blank canvas onto which décor would be pasted. As a result, I think my garden has expanded.

John Brookes comes from the mould of Gertrude Jekyll, Vita Sackville-West, and Sir Edwin Lutyens. with the outside being as important as the inside; the two areas flowing from one to the other in easy natural progression.

I admire these gardeners enormously; they are sculptors of nature. My little building would be nothing without its exterior décor, and the plants would be nothing if grown apart. However, to combine the two adds something pleasant to an otherwise rather plain garden.

I may not know anything about flowers, but I do occasionally take heed of those who do!