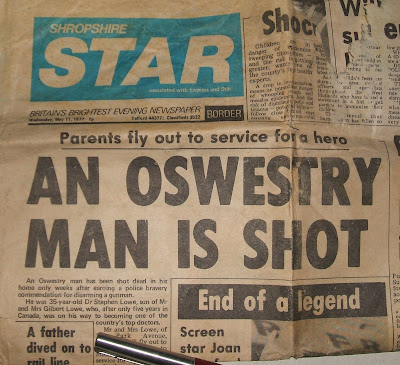 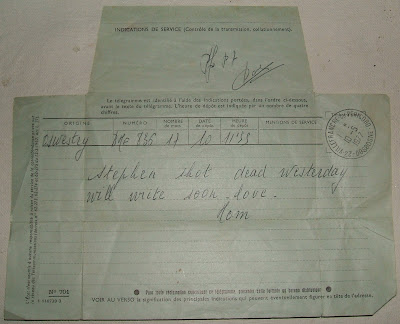 On the 10th of May 1977, at about mid-day, I was sitting in my kitchen here in France, about to eat lunch. Nearby was the sound of an approaching car, soon followed by a knock at the door.

I was handed the above telegram, and my world nearly fell apart.

The 'Stephen' to which it refers, was my first cousin Dr Stephen Lowe; the nearest thing I had to a brother. He had actually been stabbed 15 times (not shot); his murder having been witnessed by one of his 3 young daughters.

My cousin had moved to Canada in 1972 (the same year that I moved to France) and first practised at St Pauls Hospital Vancouver. He then became Director of Intensive Care at The Prince George Regional Hospital, British Columbia. He represented British Columbia on the Canadian Medical Association, and was an advisor to the Canadian Government. Just weeks before his death, he had been called upon by the Royal Canadian Mounted Police to talk to an armed man whose behaviour had become irrational; and had been highly commended for his bravery. I could go on...

Stephen had the longest string of letters after his name that I've ever seen. He had become a medical genius by the age of 35; and was destined for even greater things. Then it all ended.

I've never known the name of his killer, never really known the reason why he was killed (one presumes it was for drugs), and never known what sentence his 16 year old, next door neighbour, scumbag, murderer was given. What I do know, however, is that 38 years later I still miss my cousin terribly, and that the world is a far poorer place without him.

No doubt his killer is long out of prison (or off the naughty step) and is living comfortably with a nice home, wife, and children.