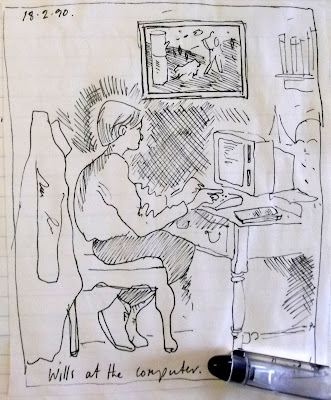 Our first computer was a rather pathetic machine, made by Amstrad; it was a PCW 85120.

At the time (1990), it seemed as if most children had begun to play computer games. We however had other ideas, and told Wills that if he wanted to play such things, he'd have to make his own.

His first attempt was called Cavern Capers. It was a typical early computer game with bombs dropping, and people rushing around trying to avoid them. He soon improved upon this with Cavern Capers 2, and Cavern Capers 3. I don't remember how many versions there were.

Wills found that programming came easily to him; it seemed as if his brain was designed expressly.

I think our reluctance to buy him those games was right; he certainly discovered a talent that otherwise might not have surfaced. There's a moral in there somewhere!