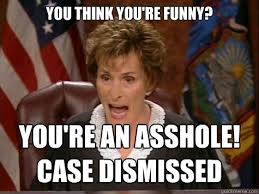 I recently watched a Judge Judy episode where US litigation culture hit a new low.

Some brainless woman had sent her doggy woggy (I think it was a Pomeranian) to the groomer for a haircut, and it was returned clipped a teeny weeny bit too short.

The owner of said doggy woggy (which had two bows in its hair) then claimed that the overly short haircut had caused  her dog to have diarrhoea for five days; and of course she wanted serious compensation.

Judge Judy is no fool, she knows that there is very little hard medical evidence linking a haircut with diarrhoea, and politely instructed the silly woman to eff-off.

US style litigation has crossed the pond, and has now taken a stronghold in the UK's courts (much of it via Brussels), and it's about time someone called 'Halt'. TV ad's encourage us to sue for car accidents, medical mishaps, and every other scratch and bruise imaginable.

When President Trump is sitting at his newly gold leafed White House desk, I do hope one of his first actions will be to put a stop to all this nonsensical 'I'll see you in court' business.

It's gone on too long.