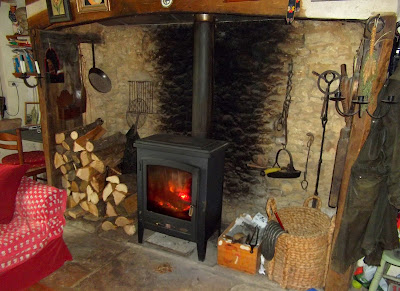 Much like in recent years, it's been a relatively mild winter so far. Nothing has warranted more than a scarf, gloves, and occasionally my Barbour. I haven't had to walk the dog in rain other than maybe twice, and we've had no snow; thank goodness.

Our little cottage is quite primitive in its way, and I like it like that. Too many of these ancient homes are restored beyond recognition, and end-up as no more than a brand new home inside an ancient stone shell.

To me a 300 year old house (which ours is) is no different to an 18thC antique dresser, or a painting by El Greco. They should be preserved, as much as possible, in their original state. Any restoration should aim to retain the integrity of the original building. We are talking 'heritage' here.

Of course these days we all have pukka kitchens and bathrooms, but these do not have to interfere with the charm of an old building.

As you can probably see above, our fireplace now contains a wood burning stove. For many years we kept the original open fire, but it became clear that it was far more practical to have the fire contained so that sparks could not fly about whilst we were out. We rather dreaded returning to a burned out shell.

However, the old fireplace is still there, and 10 minutes work would return it to its original state. I can't imagine ever living in a house without a fire, or the aroma of wood smoke.