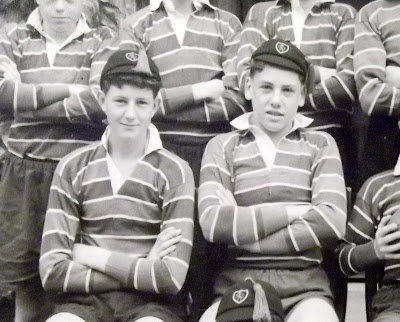 I was recently asked by an old Prep' School friend, to name the people on this 1960 Rugby team photo. When I came to the boy on the right (the one on the left was me) it brought back strange memories.

His name was/is Fennimore, and as you can probably see by the photo, he was a big lump of a person; we were both 13 at the time. He considered himself the strongest boy in the school; if not the brightest.

We were once matched against each other in a Boxing Match, and, naturally, I feared the worst. I imagined that I was going to get a real drumming, so I concocted a strategy. When the bell sounded for Round 1, I flew at him and didn't stop throwing punches until the referee stopped the fight. Poor old Fennimore; he didn't know what'd hit him (other than me). Later that evening I found him blubbing; his 'tough guy' reputation had been trashed.

It's not always the strongest who wins a fight; it can often be the one who uses a little guile. If I hadn't employed a simple strategy that day, I would probably have ended-up with a broken nose.

I wonder what became of him?