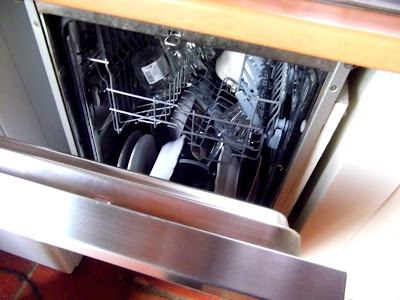 Much of our electrical kitchen equipment has a mind of its own, and this 'clettering machine' (washing-up machine) is no exception.

When it first arrived, Lady Magnon couldn't use it at all. She pressed the suggested buttons, and nothing happened. Its usage became something of an intelligence test, although there was nothing intelligent about its workings.

Lady M eventually developed her own system that involves several buttons, a rabbit's foot, and offerings of cake, but even this occasionally encounters resistance by Mr Smeg. I can't tell you the amount of times I've found Lady M, on her knees in front of the machine, begging it to start.

Me, I use the sink. A bowl of soapy water and a sponge, and I know where I am. Anyway, I have no idea how the machine works, and I don't want anyone to try to explain it to me either.

One of these days (if I have time) I'll also tell you about our oven; but let me give you a tempting preview.

Mr Bosch will only work when switched to 'off', then to turn it off after cooking requires a visit to the fuse box. Need I say more?

I think Mr Smeg and Mr Bosch have made some evil electrical alliance.