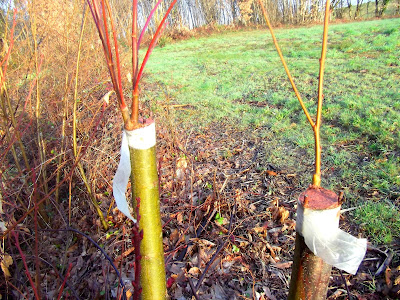 For several years now, I've decided that we need at least one pukka Chestnut tree of our own. With so many productive trees around us, and with us eating so few Chestnuts annually, this would seem totally unnecessary to most people, as in fact it does to me. But I still think we should have one.

My neighbour José who is a real connoisseur when it comes to all things Chestnut, suggested that I pull a wild sucker from the woods, plant it somewhere in the open, then graft it with a productive variety. Frankly I'd rather just go and buy a tree; I have no confidence in my grafting abilities.

On my walks I often come across trees that have recently been grafted, and most of them have failed. In the picture above, if you look very carefully at the stumps you will see that each had been grafted with three 'scions', and that in both cases only one has taken.

If the pro's can't get it right, then I don't think I stand much of a chance.

However, last year I acquired a few 'Marsol' nuts; this is a variety that doesn't need grafting, and will grow into productive trees simply by sowing the nuts. It's a big early variety, and falls out of it's husk well (very important). I sowed them in pots, and am now waiting to see if they pop-up; otherwise it'll be off to the nursery for a pukka grafted job.

I'd like to try grafting, but I think I'll leave it to others.