This is an appeal to anyone who eats BRACKEN Fiddleheads.

Fiddleheads come from either Bracken or Ferns; they are the young shoots which appear in Spring, that later unfurl to become the plants we all know.

I have read that the Fiddleheads of Bracken can be Carcinogenic, but I also hear that they are widely eaten; especially in Japan and Canada. 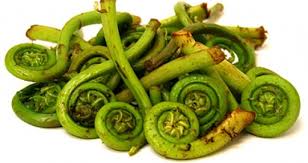 We have a ready supply on hand, so if given the confidence I would rather like to try some. Any info' (especially about the Bracken version) would be gratefully received.