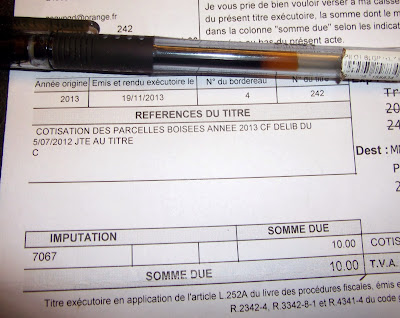 Benjamin Franklin famously plagiarised Daniel Defoe when he wrote "In this world, nothing can be said to be certain except death and taxes".

Well I'm not yet convinced about 'death', but as far as 'taxes' are concerned, he was right!

Some time back I received a House Tax (rates) bill for a house I didn't know I owned. At the time I wondered if somehow it had been included in some other purchase I'd made, and I became quite excited. Of course reality soon replaced my exhilaration, and I was sadly informed that it had all been a big mistake.

Just recently another bill has informed us that we own woodland on which we must (of course) pay money to the State (above). The Cotisation des Parcelles Boisées (dues for wooded lands) is not huge; just a matter of €12 (including TVA tax on the tax), but where we wondered was our woodland?

Lady Magnon popped down to see the Mayor, and was informed that 'OK, you may not own any woodland, but your land is being taxed as if it WAS woodland; and you are obliged to pay-up regardless'.

So, there we have it. We must pay a woodland tax on woodland we don't own. Yup, that sounds right!