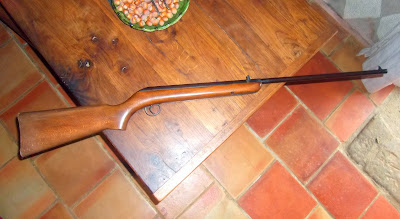 You'd have to have known my father to appreciate the totally 'out of character' nature of this gift.

I had carte blanche with the gun. No supervision, no training, and no limit to my targets. I just took it out into the garden, and shot at whatever I fancied; luckily the garden was quite big, and we were also out in the countryside.

Of course, for me, it was just about the most perfect Christmas present imaginable, and I didn't abuse the trust that was put on me (or very seldom anyway), but why he gave it to me in the first place is still a mystery; he just wasn't that sort of person. I would never have given my own children something as potentially dangerous; certainly not aged 10.

My own children did shoot at targets, as do my grandsons now, but it is done with a very low powered air-pistol, and in strictly controlled conditions. These things are NOT toys.

When they are older I may introduce them to my father's Christmas gift, but it'll be a long while before I do.

I should add that the gun is in as good condition now, as it was all those years ago.