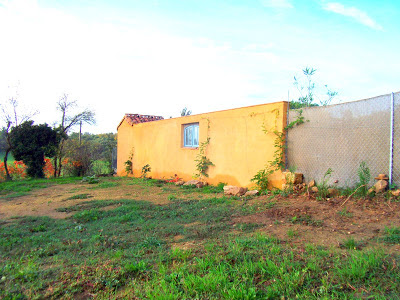 I'm afraid that our year has been dominated by one thoughtless action; the building of this bloody 8ft high orange wall, bang-up-against the boundary of our property. It was erected by my idiot neighbour to replace a perfectly good hedge behind their pool; and, amazingly, they even seemed to think we would be delighted!

Without a 'by-your-leave', they trampled all over our land, dumping piles of sand gravel and blocks. They drove huge lorries up and down, leaving the ground totally compacted. And they left our field filled with general rubbish, and waste lumps of concrete. As soon as they were done, they installed the 20 metres of canvas covered 'Keep Out' wire fence (right), and that was that. Not another effing bloody word; just scowls!

Never have I encountered such arrogance from someone that we used to consider a 'friend'. We're not certain, but we also think he's built it on OUR LAND (by a foot or so). We now no longer have anything to do with him. If one day he should apologise, we'll see; but I don't think insolent parvenu Parisians do that sort of thing.

When the séchoir is finally finished, we'll be looking out on what might well be a tumble-down, orange, bungalow (complete with rotting window), where once there was perfectly tranquil greenery. As you can probably see, we HAVE started the camouflage work, but the scars from his lorries will remain for ages! 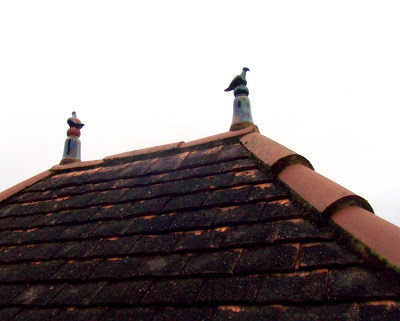 Otherwise it's been a delightful year. We've achieved all we wished to achieve; even the grounded birds were returned to their pinnacles on the Pump House.

The pool itself received more use than other years, I'm not sure if it was simply a question of good weather, or our diligence in managing to conserve the sun-warmed water. Both our UK based grandsons are now swimming properly, so next year will no doubt be even more riotous. 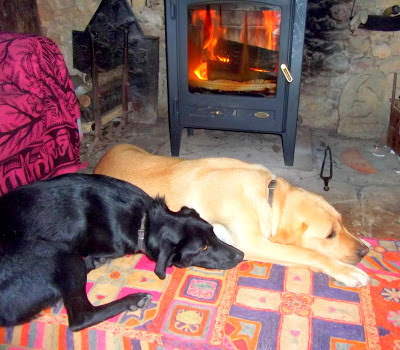 The dogs are both now 2 years old. Bok's birthday was on the 28th of November, and Monty's on the 28th of December; just one month apart. Of course they had a very big two-dog party. Looking at how they love to lie by the stove, I have a feeling that they prefer winter to summer. We are so happy to be able to share our lives with them. 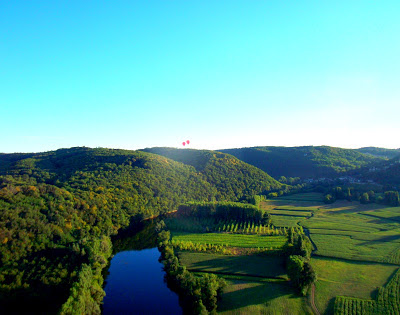 We'd been waiting for two years for our balloon flight, and on August 16th we finally flew. It was a perfect evening, every local balloon was airborne and, after a two hour flight, our pilot managed to land us in exactly the spot from whence we'd taken off (a few 'Champagne drinking' metres from the Compact Royce). Brilliant; if you ever get the chance, go for it! The 'tower' continues to enthral us; we slept there from May to the end of September. I still refuse to install electricity, and its simplicity is stunning. Our only problem is Freddie the cat; we usually leave the door wide open at night, meaning that he comes in and jumps on the bed (on us). Little monkey.

Otherwise 2012 has passed quietly. Our daughter, Tenpin, gained her Masters Degree. Our son, Wills, moved to Australia. Haddock's (as usual) flourished. And, amazingly, I was honoured with the naming of a soap!!! 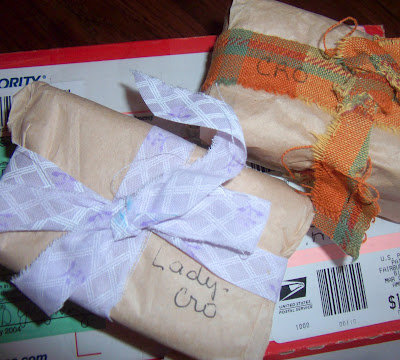 Bars of Crobar can be ordered at opies99@gmail.com. Donna, its creator, is an American Maitre Savoneur and Organic Farmer, and these would make wonderful presents (ahem).

So, we continue along our unimportant little paths; we try to upset no-one, and we HAD hoped that no-one would upset us, but some things are beyond our control and we simply suffer in silence. If such a thing as Karma really does exist, then our neighbour is in for a HUGE shock. 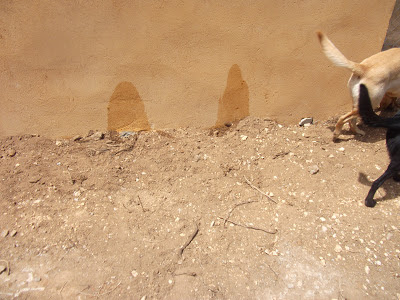 And finally to my favourite picture of 2012. The boys giving their knowledgeable opinion about the new orange wall. Those dogs are no fools!

p.s. And finally, may I add a huge thank you to everyone involved in last Summer's Olympic Games; you managed to re-install London as the 'coolest place on earth' (which it has always been, in my eyes).